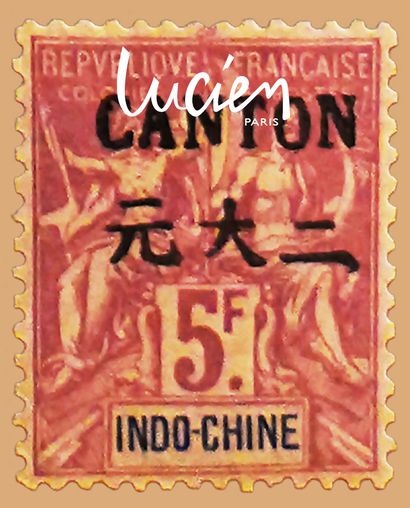 Please note! The photographs reflect only a part of each much larger lot.

Stamp collectors are said to be great lonely dreamers.

Jacques Dessinges' beautiful collection is that of a traveller.

He grew up in Le Perreux-sur-Marne with his parents, who ran a modest brewery.

Contemplative by nature, not inclined to play like his little friends, he preferred to isolate himself to read or let his mind wander. This accelerated his maturity.

All his life, he collected stamps and oriented his choices towards overseas France.

Every fortnight, on Saturday mornings, he walked the Carré Marigny on the Champs-Élysées in search of the missing pieces. During the week, he frequented the specialised dealers in the Rue Drouot.

He joined a philatelic club in Vincennes to which he devoted all his Sunday mornings. There, stamp booklets were exchanged, from which each member had to choose the items he wanted.

His children became the couriers of these little notebooks, which they deposited in the collectors' mailboxes.

His office was the place of his solitude. But the dreams of elsewhere that he cultivated there found their culmination in the many trips to the other side of the world that he made with his wife throughout their life together.

His father-in-law, who was also a philatelist, gave him his own collection of French stamps from France, which completed the circle of the French presence on the globe.

He later started a collection of assignats and cancellations.

He tried in vain to introduce his children to philately, but was more successful with his grandchildren, who were enthusiastic when he gave them the collector's kit: an album, a pair of tongs and a bag of stamps, which they lined up according to their tastes: boats, flowers, trains, etc.

He continued to collect stamps until the age of eighty, two years before his death in 2010.

A car park is reserved for our kind customers.

LIVE AND ON SITE SALE

- On site, in the saleroom (within the limit of places available according to government restrictions)

- During the live sale, on https://www.interencheres.com

- Or by purchase order on contact@lucienparis.com or postal route (we thank you to send us your ID, address, phone number and bank details).

- Or by phone (we thank you to send us by mail your ID, address, phone number and bank details, so that we call you during the auction to relay your bids to the auctioneer).

Your invoice will mention the contact details of the transporters with whom we regularly work.